The keynote speakers of Forum 2017 are: 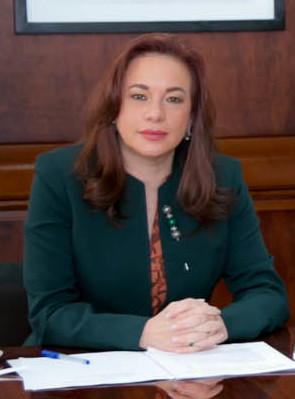 On 5 June 2018, the United Nations General Assembly elected Ecuadorean Foreign Minister María Fernanda Espinosa Garcés, as President of its 73rd session; only the fourth woman to hold that position in the history of the world body, and the first since 2006. The President of the seventy-third session of the General Assembly, María Fernanda Espinosa Garcés, has more than 20 years of multilateral experience in international negotiations, peace, security, defence, disarmament, human rights, indigenous peoples, gender equality, sustainable development, environment, biodiversity, climate change and multilateral cooperation. She has served Ecuador as Minister of Foreign Affairs (twice), Minister of National Defence, and Coordinating Minister of Natural and Cultural Heritage. In those capacities she coordinated the Sectorial Council on Foreign Policy and Promotion, which includes the Ministries of Tourism, Culture and Heritage, Foreign Trade, and the Environment. Ms. Espinosa Garcés was Chair of the Group of 77 and China until January 2018, and also served as Chair of the Andean Community.

Spanish political scientist, professor at the University of Salamanca. He studies the political parties, political systems and the parliamentary elites of Latin America.

Chilean Economist. He is Professor of the Department of Economics and the Instituto de Estudios Internacionales at the University of Chile

Chilean sociologist, political scientist and essayist. He received the National Prize for Humanities and Social Sciences in 2007 for his lifetime contribution to the field. Advisor and Consultant to numerous government and private institutions, Chilean and international, Garretón has belonged to the board of Chilean and foreign journals and has been a jury member for the award of research scholarships and fellowships in Chile and abroad.

Distinguished Service Professor Emeritus of Economics and Latin American Studies at the University of Pittsburgh, a visiting professor, researcher and lecturer in 40 countries, and the author of 92 books and 300 articles published in 7 languages in 34 countries. Past President of the Latin American Studies Association, member of the National Academy of Social Insurance and of editorial boards of six academic journals. International Labor Organization Prize on Decent Work shared with Nelson Mandela

Chilean journalist and politician.She has worked in radio and television since the 1990s. She was the Broad Front's nominee for the 2017 presidential election, after winning the left-wing coalition's primaries on 2 July 2017. Sánchez represents a new Chilean political left, which has been represented since the return to democracy by the Concertación and Nueva Mayoría.

nonresident scholar at the Baker Institute Mexico Center. He is also a senior professor and researcher at the School of Government and Public Transformation at the Monterrey Institute of Technology and Higher Education (ITESM), Santa Fe campus, and editor-in-chief of Latin American Policy, a biannual journal distributed worldwide by Wiley-Blackwell. From 2011 to 2013, Morales was the director of ITESM’s School of Government and Public Administration (EGAP) at the state of Mexico campus.

Professor of Area and Cultural Studies Department of World Cultures, President of European Council of Social Investigations of Latin America

Ph.D. in Economics, professor, head of Institute of Latin America of RAS, the member-correspondent of RAS, president of Russian Association of Researchers of Iberoamerican world.

Member of Presidium of Council for foreign and defence policy, deputy-head of “Russia” TV-channel on special information projects, president of Institute of Bering-Bellingshausen for the Americas

Ph.D. in History, professor of Department of history and politics of European and American countries of MGIMO University, head of BRICS Center, MGIMO..

Director of Center for global and regional researches (Argentina), head of the Regional Coordination Center of economic and social researches of Latin America and the Caribbean, professor of Central University of Venezuela, invited professor of Harvard University, University of Pennsylvania, universities of Europe and Latin America, ex-adviser of Ministry of Foreign Affairs of Venezuela.

He holds a PhD in Education from the University of Buenos Aires. Since 1992 he has been living in Brazil, where he teaches at the State University of Rio de Janeiro. Currently, he is Deputy Executive Secretary of the Latin American Council of Social Sciences (CLACSO) and Director of the Latin American Faculty of Social Sciences (FLACSO) in Brazil. He has published more than twenty books on educational reforms in Latin America and the Caribbean, some of which are reference works to study privatization processes and analyze the dynamics of exclusion that affect contemporary Latin American education

Doctor in history, professor at the Faculty of International Relations of the University of St. Petersburg. He is the specialist in the history of the left movement and the Comintern in Latin America. The author of the biographical dictionary "Latin America and the Comintern".